Now we want to open Scratch, the programming language we will be using, in our browser.

First open a new tab. Then go to the URL scratch.mit.edu. You should see a web page that looks like this:

After signing in, click on the button that says “Create” in the upper right hand corner of the window. This will create a new Scratch project for you to work in. 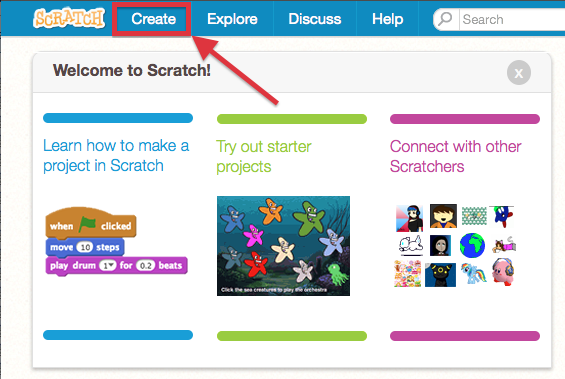 Now that we’ve figured out how to create new projects, we need to learn what we can actually use in Scratch!

Something that will help us is using common words to talk about things in computer science. We’ll try to always define new vocabulary words in our “Lingo List” as we see them.

In the top center of the Scripts tab of the Scratch editor, there is a list of colored rectangles and types of blocks. These are the block tabs. We use them to look at lists of the different kinds of blocks.

Tabs (for each Sprite):

In the top center of the Scratch editor, there are three tabs that say “Scripts”, “Costumes”, and “Sounds”. These are the tabs for each sprite.

Blocks are the colored pieces that we move around to make Scratch programs. Different colored blocks are used to do different things. The block color is the same color that goes with the block tab where you find that block. 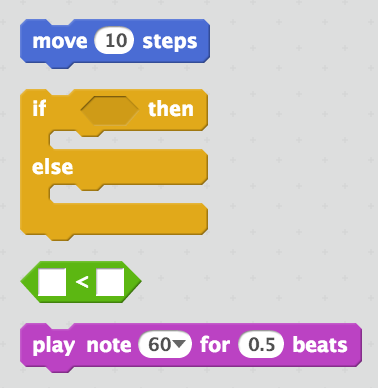 A script is a group of connected blocks that does something when you double click on it.

A sprite is a Scratch character. Each sprite has its own scripts, costumes, and sounds. Sprites are shown on the stage and in the sprites area in the bottom left part of the screen. 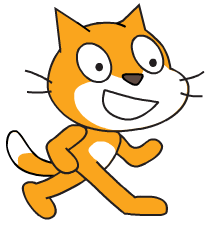 The appearance of the sprite on the stage. Each sprite can have multiple costumes. 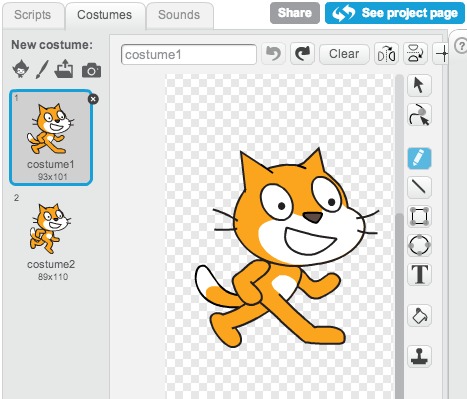 The stage is in the upper left part of the Scratch editor. This is where you can see what happens when you run your scripts. 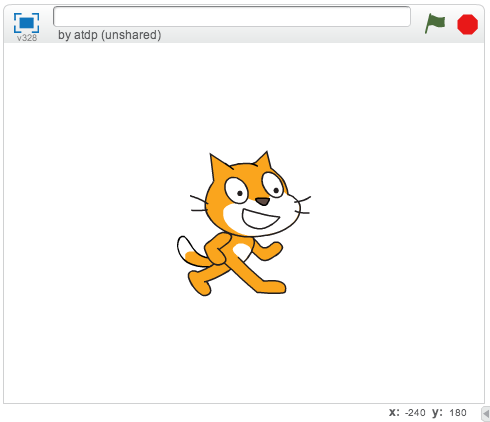 We’ll also use computer science lingo in this class! These words describe things that are in Scratch and other programming languages.

Keep thinking of more computer science lingo as our class continues! After you’ve looked these terms over, you can move on to the next page!

In your Scratch project, drag some blocks onto the “Scripts” area.

Now try to connect the blocks to create this script below! 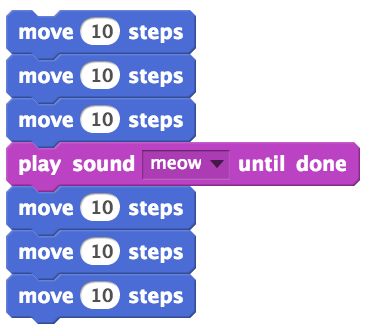 How can you remove the

block from the script you just wrote so that it looks like the script below? Figure this out now! 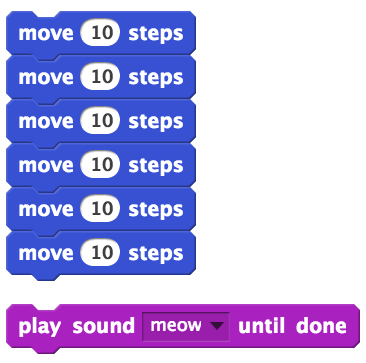 Try connecting some of play note blocks in the scripts area. Run the script you made by double clicking on it (there should be a yellow glow around it).

Great! Now you know how to create and change scripts in Scratch. Take some time to experiment with creating different scripts.

You can change the name of your project by filling in the box at the top of the stage, in the upper left portion of the screen. In this picture, we’re naming our project “1. Repeats in a Song”.

It’s really important that you save your Scratch projects often. Otherwise, you might lose something you’ve been working really hard on! It hurts, I promise.

To save your project in Scratch, click “Save Now”  in the upper right corner of the screen, next to your username. You can also click the “Save Now” option in the “File” menu in the upper left part of the Scratch editor.